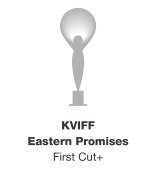 The online showcase of the selected projects will take place on Tuesday, August 3, at 2pm CET.

One-on-one meetings with the production teams will take place online on the Wyth plaftorm as well.

To attend the online live stream and one-on-one meetings, request your registration via this form.

First Cut+ is a new program created for boosting the competitiveness and marketability of feature films that previously participated in First Cut Lab. The program was launched in 2020 through a close cooperation with two dynamic & well-established film industry platforms: Trieste’s When East Meets West and Karlovy Vary IFF’s Eastern Promises Industry Days. First Cut+ is the only new action that received financial support from the Access to Markets scheme of Creative Europe’s MEDIA program in 2019.

First Cut+ consists in the promotion of a portfolio of 16 fiction feature films at the stage of post-production, predominantly from countries with a low production capacity (at least 75% of the films) and with a focus on Central & Eastern Europe. The range of films is large: from both debut & experienced directors, small and larger budgets.

8 films – half of the portfolio – were promoted during the winter on-line session at Trieste’s When East Meets West (January 2021), and another half during the summer session, at Karlovy Vary IFF’s Eastern Promises Industry Days, enabling to welcome most eligible projects, no matter the timeline of their production.

Participating projects will have 3 days of consultations on promotion followed by an online Works-in-progress session.